A Not So Warm Welcome

The mission takes place at the events in Lake-town after the arriving of the dwarves. As the mission name indicates, this is not an enthusiastic reception as in the book. Instead, the starting point is similar to the one in the movie where the dwarves are not welcome, and Bard must try to smuggle them to his house. This would not be hard if the city watch did not have their sentries everywhere, making this venture quite difficult without the dwarfs being discovered. The player has to distract the city watch in one way or another and claim favour as well as fulfill them.

Lake-town: a city full of contradictions

While some are doing well thanks to Lake-town’s status as an important trading center and have become rich through trade, others do not even have the bare essentials to live and trade their goods on hidden black markets. Above all, there is the mayor of Lake-town. Thanks to the high taxes, he lives a rich and easy life, while the city guard ensures law and order and punishes every little disobedience. Thanks to Bard's help, the dwarfs manage to get unnoticed into Lake-town, but this does not solve their problems by far, since they are stuck in their fish barrels until Bard has given them a safe route to his house.

Like the first presented mission, this mission will use the same responsive system that allows the player to interact with the characters. However the difference is that it's not just about talking to them, but about solving their quests. Bard has to make some difficult decisions that may well affect the rest of the campaign in the final version of the campaign. So how is Bard going to behave? Will he help the people and rebel against the mayor or will he exploit the corruption to gain an advantage for himself? Or maybe he finds a completely different way? 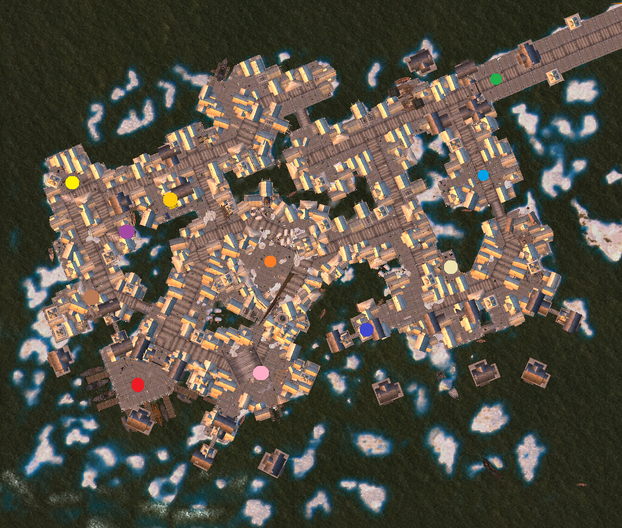 On this image you can see a few of the landmarks of this map, namely:

As this map is RPG style, a lot of objectives are hidden, like quests, for you to discover and make your own way. The primary objective of the map is:

In order to do so you will have to distract the guards, represented by laketown captains with red exclamation marks above their heads.

Community content is available under CC-BY-SA unless otherwise noted.