"Below them ... lay the inner plain stretching away into a formless gloom beyond their sight. The wind of the world blew now from the West, and the great clouds were lifted high, floating away eastward; but still only a grey light came to the dreary fields of Gorgoroth. There smokes trailed on the ground and lurked in hollows, and fumes leaked from fissures in the earth. "
—The Return of the King

The Plateau of Gorgoroth is a desolate wasteland that forms a great part of the ashen lands of Mordor. 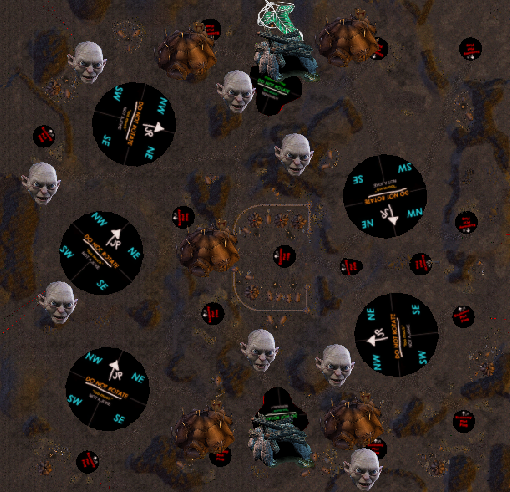 This map offers an opportunity for a brutal 3v2. Outposts help to protect flanks, and control of the central settlement could be life or death for the two players on the right. As they are at a disadvantage in a 3v2, they have more settlement plots near their bases.

*POIs are marked with an elven brooch.*

Orc lairs are not as common as Goblin lairs but are basically identical besides the appearance. Their orcs deal a very small amount of damage, are high in number and respawn quite quickly. Usually the best strategy is to rush for the lair, cut the flow at the source and then take care of any leaks. Cavalry can also be used to clean up the exteriors but can be tricky due to orc spears being a part of the creeps.

Retrieved from "https://edain.fandom.com/wiki/Plateau_of_Gorgoroth?oldid=26789"
Community content is available under CC-BY-SA unless otherwise noted.